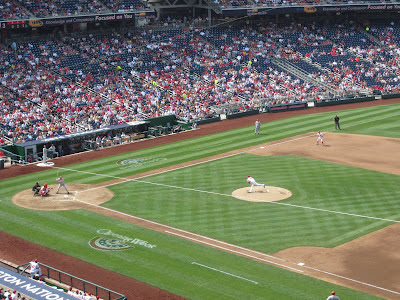 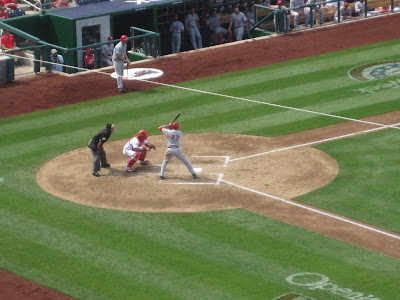 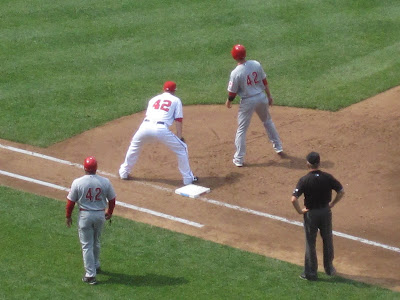 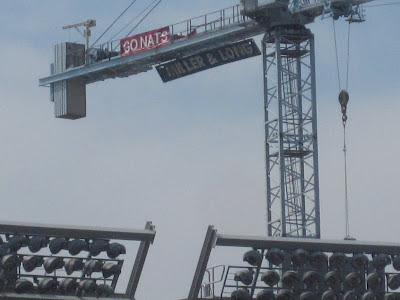 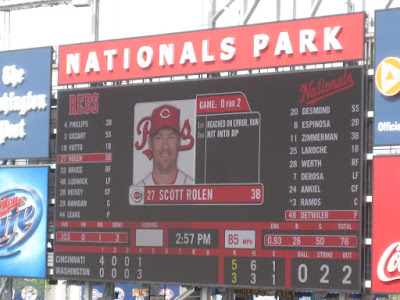 Posted by Cathie at 7:07 PM No comments: Posted by Cathie at 9:55 PM No comments:

On franchises and cities

Today the Cincinnati Reds franchise won its 10,000th game. That only dates back to 1882 when the team was in the American Association, having been expelled from the National League in 1880 for selling beer and playing games on Sundays. Technically, the Cincinnati Reds team of 10,000 wins is not the same as the Cincinnati Red Stockings team that was expelled after being an original member of the National League, nor is it the same as the first professional baseball team that was founded in 1869. But fans don't care about ownership groups or franchises.

A baseball team belongs to its city.

The Reds - the current franchise - joined only the Cubs, Cardinals, Giants, Dodgers, and Braves as 10,000 game winners. But the city had other teams with more wins. The 1869 Cincinnati Red Stockings won 137 games in two seasons. The Cincinnati Red Stockings of the original National League won 125 games over five seasons. (Those were some BAD teams.) They belonged to the city, regardless of the owners. They became a part of the culture of the city.

So annoying when hipster wannabes wear Expos jerseys to Nats games. Senators? Fine. But Washington inhabitants gave not a thought to the Expos when they were in Montreal.
Posted by Cathie at 7:31 PM No comments:

Gazing out at the contrast between the black night sky and the incandescence of the stadium lights, eyes blurred from seven innings of beer, I felt as if I were in some other world, removed from the serious and surreal life I had been living, the one where Beirut was my home and the Cosmonaut the object of my longing. I stood on the concourse with someone else, a brokenhearted opera singer from another generation, both of us obnoxious in our happy state of being. The night was intoxicating; baseball happened on the verdant diamond below but it was not only baseball that happened. I felt myself transformed from the brooding figure of recent times into the carefree, merry soul that I had been in the fleeting periods of happiness in my life.

It wasn't just the magic of baseball. Anyone who read this blog back in the days when I wrote daily posts knows I used to believe there was something about baseball that felt almost supernatural, almost divine. But then I went to Beirut and I saw the holes in the buildings from the bullets and the bombs and I felt the tension among the Lebanese when some powermongering thug or other threatened the stability in the country and I realized that baseball doesn't matter.  Or so I thought.

But as I looked into the kaleidoscope crowd, the heaving and sighing of huzzah reached my ears and I realized I had once again achieved a kind of zen and this game had brought it to me. Neon signs glowed and glowered around the ballpark and concessions wafted through the vernal air and there was a consistency to it all that I vaguely recognized as something I had once loved. I was in the political capital of the world, far removed from the lazy summer days on the banks of the Ohio, but it was baseball all the same. Somewhere beyond the parking garages and the shiny, soulless buildings that have sprung up in the last few years around the park loomed the grand dome of the temple of democracy. From where we stood, we could not see it. It was just as well. Like so many sacred things in our American lives, that temple has been sullied. So, too, has the game, with its nine dollar beers and forty dollar t-shirts and its hundred million dollar players who, if not indifferent to us, despise us. Consumption had spoiled baseball, but baseball found its way back into my heart anyway - me, a wandering, struggling writer who only wants to embrace the beautiful things in life and share them with the world.

I had a blast on Friday night at Nationals Park with a new friend. That is a beautiful thing. (Though the Reds losing is not!)
Posted by Cathie at 9:26 PM No comments:

Joey at the Bat 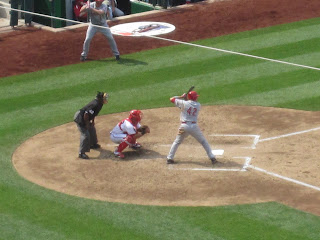 From Sunday's win versus the Nationals...
Posted by Cathie at 7:22 PM No comments: I remember getting The Sporting News when it had photos of baseball players on the cover.
Posted by Cathie at 11:18 AM No comments:

On our holy day

Our baseball gods, who art in a cornfield in Iowa, hallowed be thy game. Thy stadium come, thy will be done, on grass that was made in heaven. Give us this day our daily hot dog bun and forgive our umpires as we forgive those who umpire against us. And lead us not to a second tray of nachos, but deliver us from Deadbirds and Bankees$. Amen.

Join us in DC at Lou's bar in Columbia Heights for an Opening Day party with fellow Reds fans!  4pm
Posted by Cathie at 12:42 PM 1 comment:

Blast from the Past: Where's the Pete? 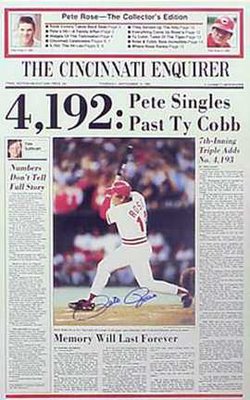 The Hall of Fame's doors will remain shut to Pete Rose, who won't appear on the baseball writers' ballot in his final year of eligibility.

Commissioner Bud Selig will not rule on Rose's application for reinstatement before the 2006 ballot is released Nov. 29, according to Bob DuPuy, baseball's chief operating officer.

September 11, 1985. I was an eight year old celebrating my grandfather's birthday with my family. Eric Show was pitching for the Padres. Ty Cobb was about to become #2. Cheers erupted from the Cincinnati crowd, fireworks exploded, and the game was stopped for more than ten minutes as a red Corvette was driven out to the field. Pete Rose, a.k.a. Charlie Hustle, had just hit #4192.

Cincinnati fans forgave Pete long ago. Baseball fans forgave him during the All-Century team ceremony, when he stepped onto a Major League Baseball field for the first time in a decade and received several minutes of a standing ovation. But Selig can't forgive him? Why? Because Selig blames him for the death of his friend, Bart Giamanti, who died of a heart attack in the midst of the gambling investigation.

The guy had 4256 hits in his career. He played the game harder than anyone who ever played the game. So he had personal problems? Everyone does. Remember Steve Howe? He was banned for life for his personal problems, but he was forgiven and reinstated. People make mistakes. Pete has paid more than enough for his.
Posted by Cathie at 9:12 PM No comments: