I've been an MLB.TV subscriber in most years since 2004, with the exception of 2008 and 2011 when I was in Ohio for the summers. It has ALWAYS been fraught with problems, from the billing process to the technical process. This season, however, has been the worst.

It starts with Verizon internet service in Columbia Heights, DC. We pay for the highest available speed at 1000 kbps. To get a game on MLB.TV, you need to have a speed of 768 kbps. Seems ok, right? Except it rarely comes in at that speed. More often than not in the evenings, you know, when baseball games are played, the speed runs from 650-800.

But it's not just Verizon that is the problem. I don't mind watching the games on the lowest quality. However, the video quality control on the MLB.TV media player simply doesn't work. It doesn't let you set your own quality despite having a box you can uncheck to control the quality yourself. It tries to detect the best quality for you. Now, because my connection speed fluctuates, I can't have it detect the best quality for me because it comes in fast sometimes and then comes in at a crawl. This confuses the media player and causes a lot of buffering because it keeps trying to adjust the quality. But the box won't stay unchecked. It keeps going right back to trying to detect the best quality even after I've unchecked it. That's in addition to the frequency of Adobe Flash Player crashing.

Talk to customer service, you say? I have. By some miracle, every time I call Verizon, the speed is by some "miracle" topped out at an unwavering 1000. They even take over your computer remotely to "prove" it. And MLB.TV? They assume we're all idiots and tell us the usual stuff - clear your cache, run your virus software, reboot your computer, reboot your router, is your software updated...YES YES YES. The service is FULL of bugs. You'd think that after a decade of offering the service, they'd have perfected it. But no. They are so busy introducing new features each season that require an ever increasing amount of bandwidth that the service, which could be a considered a miracle of life if it actually worked correctly, is frustrating more than it is pleasant. How often have I given up and headed over to Lou's bar to ask them to play the Reds game? At least once a week.

And no, it isn't my computer. It happens on my work computer as well. I take care of my computer, constantly checking for updates, regularly cleaning it up, etc.

So yes, this is a rant. I love the thought of being able to watch the Reds anywhere in the world. I just wish it worked properly.
Posted by Cathie at 10:15 PM 1 comment:

On the second day of our whirlwind NYC trip, we saw the Reds play at Yankee Stadium. Though it wasn't old Yankee Stadium, it still had soul. After opera man and I made a visit to the Met and had some overpriced oysters near Lincoln Center, we hopped a cab to the ballpark, a trip that took much longer than we had anticipated on account of it being Friday rush hour and all. The cabbie almost made us get out because I thought he was taking us the wrong way.

We missed the first two innings and spent the next two roaming around the stadium before taking our nosebleed seats for the second half of the game. It was so high I was afraid to even stand up. The stadium seats 50K and it feels HUGE. Yankees fans yelled at us, and one told opera man he'd see him in the parking lot. They were an obnoxious bunch by the end of the game. Reds lost but it was still great to be there. A few photos: 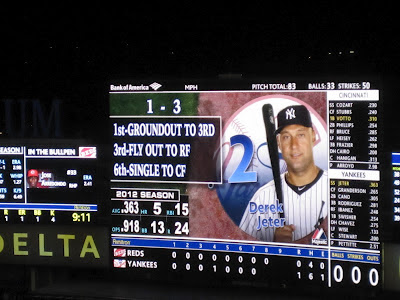 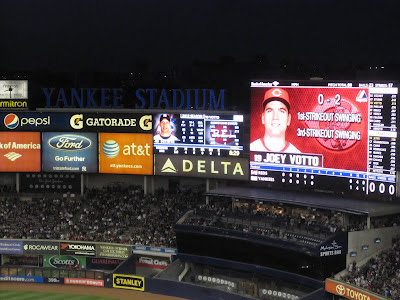 Posted by Cathie at 4:46 PM No comments: