About two weeks ago, MLB Advanced Media made an update to its At Bat app. In an instant thousands of people with Android devices lost the ability to listen to or watch baseball games on their phones.

We paid for this, of course. And now we are not able to use the product that we paid for. It worked fine in April. I used it nearly every day to listen to ballgames while gardening or to watch when I was not home. Now that's all gone.

Customer "service" is no use. They've had hundreds of calls but they won't do anything about it. I sent an email to customer "service" at first. It took a week for them to respond with this generic nothingness: 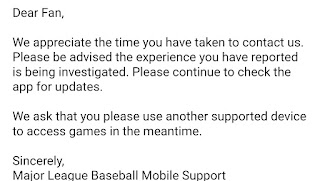 There's no apology, no explanation that this is a widespread problem. I know it is from the dozens of people who have said they had the same problem on Twitter. Here are a few:


Same problem with no response. #Frustrating

I have sent multiple complaints. No response...

and mine is now broken. It must have added another update.

I just asked for a refund.
They DM'ed me trying to "once again" fix the problem.
I just kept responding "No. I want a refund".
So I guess I am getting one.

The https://t.co/clWpAC3jJJ app stopped working on my phone this weekend as well.

It's not working for me either. @mlbatbat


You get the picture.
When I finally broke down and called after a week, the support guy didn't seem to care. He transferred me to technical support. That guy didn't care, either. He told me they've had many calls about it but he didn't care. He just assigned a ticket number.

This is what happens when I log in through my settings. (I have cleared credentials multiple times and re-logged in. Each time it says I am good to go. 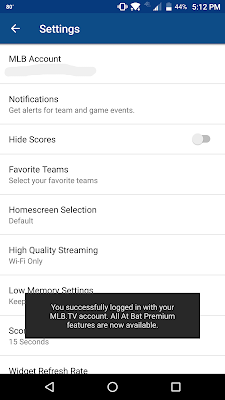 But when I try to listen to a game, I get this: 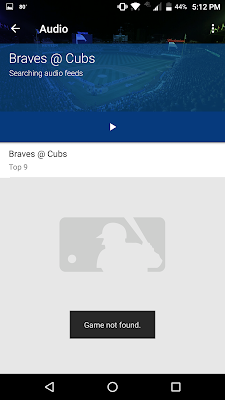 And when I try to watch a game, I get this: 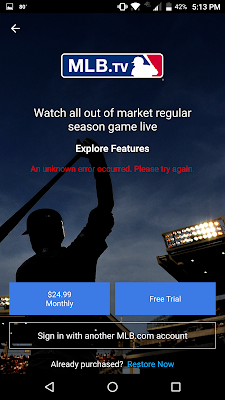 Now, I worked in a place where we released an app update that was broken, and you know what we did? We pulled it from the Playstore and put up the old version until we fixed the new one. It took one day.

It's been two weeks and MLBAM has not only not fixed it, but they haven't apologized, haven't offered a refund, and haven't given any indication that they are going to fix it at all. IT'S BEEN TWO WEEKS.

I paid for an MLB.com subscription, as I have for a dozen years or so now. At Bat is part of that subscription. It does not work anymore. You make it work FOR ME. It's not the other way around. I'm not supposed to go get a phone that fits your product. I'm not buying a freaking iPhone. I so hate corporate America. There is literally nothing we can do. I will file a complaint to Consumer Affairs or whatever, but nothing will come of that. We are powerless against big corporations that don't give a shit about anything but profit. Screw the customer. They got their money from me already, why should they care about me being happy with the product I bought?

I had the same problem, but it didn't last that long. Their Twitter customer service guys helped and got me back up and running in less than an hour.

Don't get me started on blackout areas though.