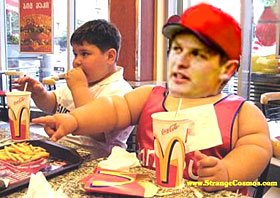 I went to see the Nats play the Sausages last night, a dull game with some rain and no offense until the ninth inning. Felipe Lopez started the ninth with a triple and Ryan "Brooks" Zimmerman brought him in with single for his second RBI of the game, Nats down 5-2. Nick Johnson flied out, Jose Vidro walked, and Brian Schneider walked to load the bases with one out when Ryan Church struck out and Austin Kearns came up to pinch hit for rookie Nook Logan.

Austin is fat. Seriously. I had to make a comment about it outloud because he's put on at least ten, maybe fifteen pounds. Remember his problem in the past? Well, he's fat again, and he's hurt again, reduced to pinch hitting. I thought he looked big on television, but it took seeing him in real life to prove he really has gained a ton of weight.

Austin K'd to kill the rally and end the game.

Thanks to Reds fan Pete Schrok, who generously donated a copy of Photoshop so that I may bring y'all Photoshop fun from my home computer!
Posted by Cathie at 12:39 PM