A View from the Evening 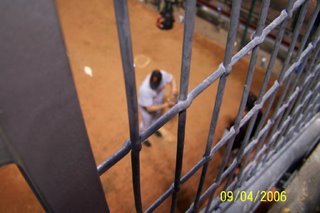 Taken from my prison cell. I am incarcerated by Disappointment. My crime? Believing the Reds would get to the playoffs this year.

Anticipation has a habit of setting you up for disappointment, doesn't it? I thought for sure I'd see the start of something beautiful - one of those mythical things called a winning streak - when I entered Great American Ball( )Park on Monday. It certainly seemed that way with a 4-2 lead going into the 8th, a red-capped crowd cheering for the Reds instead of against them like I am used to.

Things that happened at the game:

There are nine Appalachian hours between here and the ballpark, but I can feel the depressing wind blowing off the Ohio as I finish watching the Reds lose the second of three games to the Giants. I know the Reds are done. Reason and logic tell me so. But I'm one of those people who won't turn off a game even if they're down 9-0 in the ninth, unless it is after midnight on the West Coast and I can't keep my eyes open. These last two weeks, though, well, I wish my eyes would have been closed for them, because watching is painful, and I've since been imprisoned by my gloom.

(5 million bonus points if you get the reference in the title and in the post.)
Posted by Cathie at 2:06 PM